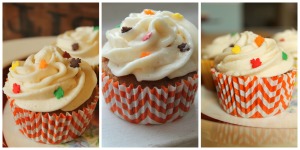 This week I had an order for gluten free cupcakes that also needed to be casein free. I had a great GF recipe but it called for butter. I found a few recipes online but all of them called for things I didn’t have in my cupboard.  Luckily, I had picked up a box of Betty Crocker gluten free cake mix the other day at the store. I was very curious to try it. I thought this could be a good opportunity to give it a shot with a few modifications of course.  After much research, Earth Balance vegan butter bars stood out as the best choice for a butter replacement in baking. They seemed pretty smooth and smelled buttery enough so I gave it a go. Adding the applesauce definitely upped the moist factor which is always important when dealing with GF baked goods as they have a tendency to dry out quickly.  I used soy milk and the vegan butter to replace the regular butter and milk in my vanilla icing recipe and it turned out very good. I also made an apple cider glaze to try on my leftover cupcakes after the order was filled. I drizzled some on top of the iced ones as well for extra apple awesomeness. Here is the recipe for you to try, happy eating!

Mix GF cake mix, brown sugar, applesauce, oil, eggs, cinnamon in a large bowl. Best 30 seconds on low speed until incorporated. Scrape down side of bowl with a spatula then continue mixing on medium speed for about 2 mins.  Pour into cupcake pans. Bake until golden brown, about 19-23 mins.  Cupcakes are ready when they spring back after being lightly pressed with finger.

Add butter to bowl and beat about 30 seconds then soy milk and vanilla. Next add powdered sugar cup by cup mixing in between until well combined.