Ok, so I got a little side tracked the last year and a 1/2 doing this … 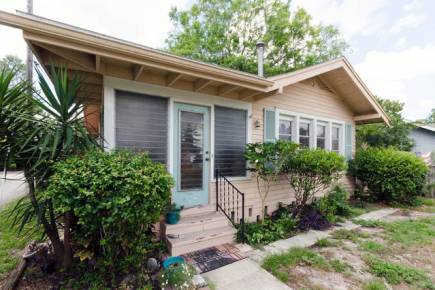 Our 1925 bungalow home in sunny St Pete, Fl before and after!

The renovation work is starting as well as the new adventures here in our grand old home. We had the pleasure of meeting out great neighbors and I invited them for dinner. I love any reason to throw a party and hey it has been a while since I got to bake something for us to enjoy. So here you go, a natural chocolate berry cake with chocolate cherry mousse filling. The cake is vegan, the mousse is so simple and delicious anyone can do it. I’ll drop the recipe below. Thanks for stopping by and have a fantastical day!

Makes enough for one 6 inch layer cake, about 6 servings.

One of my wonderful clients had a fantastic cake request. Her daughter is obsessed with puppies; (I mean come on, who isn’t?!) so I came up with a few ideas and this was the end result. I used chocolate frosting … END_OF_DOCUMENT_TOKEN_TO_BE_REPLACED

Fall is upon us! Cupcakes, caramel apples and pumpkin cakes abound.   These ghost cupcakes were pretty simple to make. I just used a marshmallow style icing or 7 minute frosting as it’s commonly known and piped out some icing … END_OF_DOCUMENT_TOKEN_TO_BE_REPLACED

I’ve had tons of fun making all sorts of Frozen themed goodies for parties these last few months. Here are a few of my favorites for those seeking inspiration. Elsa and Anna paper doll links below for some DIY … END_OF_DOCUMENT_TOKEN_TO_BE_REPLACED

Chocolate cake with reptiles and amphibians!

Yay, another fun cake theme! This reptile and amphibian party was super neat. They even had live creatures at the party! I used Oreo cookies to make the “dirt” and cut some fondant leaves and flowers. I found the cute little toy animals at the Dollar store and they worked perfectly to tie it all together. I had some scrap paper that was a grass print so I used some contact paper to adhere it to the cake board base.  It’s an easy solution to dress up a inexpensive cardboard base.  Also stops the grease stains from getting on the cardboard or paper base.  Well,  Happy Birthday Rhianna looks like you had a lot of fun!

I had the joy of making this super fun Bon Voyage cake last week! In case you haven’t guessed the person of honor was heading off to a new life in Egypt! I didn’t want to do something with only an Egyptian theme so I tried to incorporate travel into the mix with the suitcase shape. I just used fondant to make the handle, palm trees and pyramid details.  I crushed up animal cookies to make the sand and dusted the pyramids with some edible gold dust.  Overall, this was a ton of fun to make.  Best of luck to Zuzana on her journey and I hope everyone enjoyed the cake!! 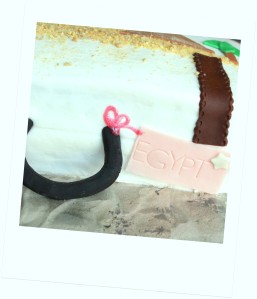 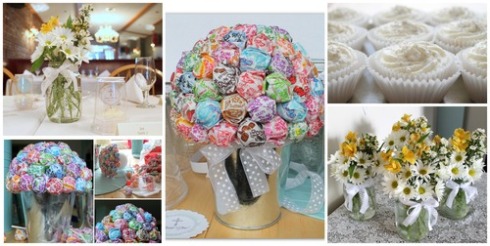 Communion time is upon us!! Tons of fun cross cakes and flowered goodies are going to be flying out of my kitchen any day now. I really like when I get Communion/Christening parties. There’s so many fun things to create since you really can incorporate anything into this ceremonious event. We were doing flowers for the tables and I thought let’s do a fun centerpiece for the kids table. Something they can engage in and enjoy. I decided to do a version of  those Dum Dum lolly topiaries I’d been seeing around the web. It was super fun and the kids loved it. Here is the easy Dum Dum  lollipop bouquet tutorial,  anyone can make it!

Start in the top center with one Dum Dum pop,  then continue to make circles around the 1st pop. It’s seriously that easy. If you notice holes here and there it’s OK. Just pop an extra Dum Dum in to fill the space. Finish with some ribbon, bows, baubles, or whatever suits your vision. I added some balled up tissue paper inside and then glue gunned the crap out of it. I used glue around the top of the tin as well to secure the styrofoam ball inside.  It’s a super easy and fun project that everyone will enjoy. To complete the look for the event I also did some white cupcake favors with custom labels in cups and some petite floral centerpieces in Mason jars. I really hope the family enjoyed the day. I know I enjoyed creating it for them!

Mason jar of daisies and alstro 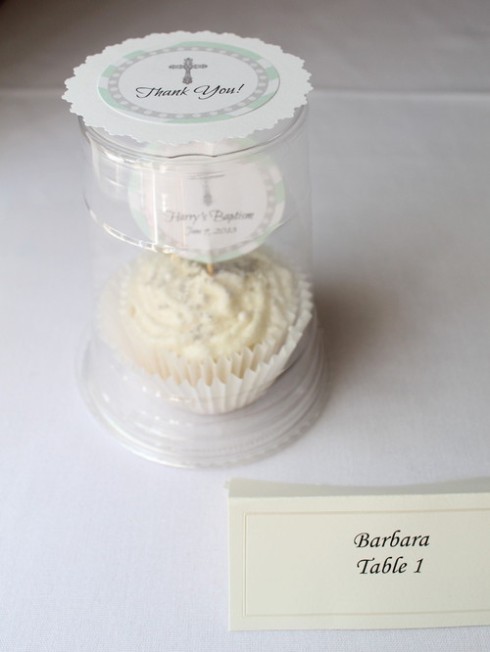 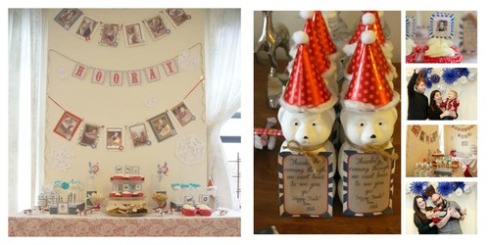 Having a winter birthday party in Brooklyn, NY forced a little extra creativity. Outside lavish garden parties with lovely tents and strings of lights just wouldn’t really be ideal in this climate. Although those are the kinds of parties I dream of throwing! I kept seeing winter party ideas but none of them really fit into my vision. I wanted something with a stronger theme to build upon. Then I had this idea of an Arctic Explorer theme!

I based everything off of an invitation I bought on Etsy. The vendor didn’t have any other printables that went along with it so I used Picmonkey and made the rest on my own. I found photos of Admiral Byrd, Nobu Shirase, Ernest Shackleton and a few other explorers to use on the cupcake toppers. I also used pictures of the Arctic ship Endurance and some other modes of transport for added interest. The cupcakes were Hot chocolate with Whipped cream Icing, I made white cake pops with white chocolate to look like snowballs and coordinating marshmallow pops with crushed candy cane topping. Snowman sugar cookies and S’mores brownies from recipes found on Pinterest rounded out the dessert table. You can find links/recipes at the bottom of the page.

We decided to do rustic style food that would fit the explorer theme and be favorable to babies taste buds as well. I made yogurt with fruit in baby food jars and called it Sno-gurt. Little finger sandwiches in the shape of airplanes and fresh fruit kabobs. The rosemary mashed potato snow balls with cheese baked in the center were a hit with kids and adults alike. For the main course we did baked beans and shredded beef sandwiches with some baked kale chips, all made by daddy! Peppermint ice cream party punch and chilled hot chocolate in mason jars topped off the tasty delights.

Party games, although awesome, seemed a little too old for the babies to enjoy. I decided to make a photo booth where everyone could dress up and have their picture taken. I made some mustaches, glued paper beards on pacifiers and rustled up some scarves, hats and other props from around the house. Everyone seemed to enjoy themselves and I used the pictures to make the thank you cards. Win-win situation!

Each baby took home a goodie bag with a golden blossom honey bear painted white to look like a polar bear. I added a little party hat made from scrap paper and cotton balls then added a thank you label. Two lollipops and peppermint tea bags. Tiny airplanes made from a piece of gum, peppermint lifesavers and a tootsie roll. then decorated the bag with a recipe card for honey S’mores that mommy and baby can make together!

I made all of the banners with scrap paper from Michaels and used Picmonkeyhttp://www.picmonkey.com/ to edit all of photos. Luckily I have two good friends with great eye who shot all the photo booth pictures. Thank you Ben Riley and Andrew Smith!

Oriental trading had cheap sets of paper snowflakes which I used for the photo booth backdrop. I also found cheap lollipops which were very inexpensive and had them personalized for next to nothing! http://www.orientaltrading.com/

By the end of the day we all had a great time and Milo really enjoyed himself! Can’t wait for the next one! 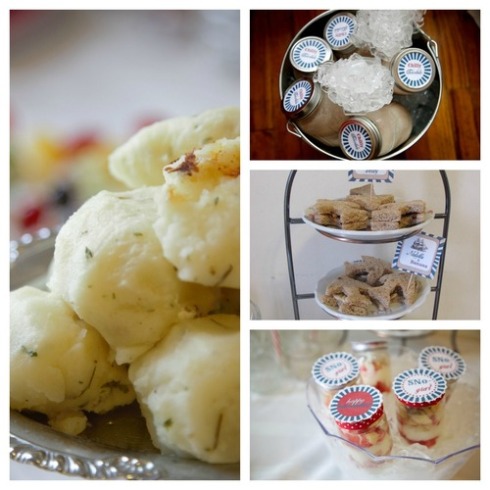